I am against all forms of dictatorship. Beyond political and moral reasons, because my father was a victim of the tyranny of Sekou Toure. Myself, I almost ended up at Camp Boiro, for a simple identity check, the same day I arrived in Conakry to spend my vacation in 1964. I escaped only because, when the military was in the process of taking our names, my father and the then Minister of Planning, Barry III, arrived to extricate me from the clutches of torturers.

Furthermore Touré’s dictatorship has ruined foundations of the socio economic development of Guinea and torn the society to the point that the country is still unable to recover, 31 years after the bloodthirsty dictator’s death. Because of it, I lived for decades in exile, sans-papiers.

But, if I were Rwandan, I would have signed, like the almost 4 million signatories of petitions out of an electorate of some six million of my compatriots did within weeks, asking Parliament to amend Article 101 of the Constitution limiting to two the number of consecutive presidential terms. I would have applauded when Parliament unanimously gave on Tuesday, August 11, the green light to a reform of the Constitution in this regard.

In 1994, I saw Kigali few weeks after the end of the nightmare that was the genocide. I felt the smell of bodies rotting in the streets, I saw dogs fattened for eating human flesh, the images of visible bloodstains everywhere are still present in my memory. No public service was operational. That means no bank or hotel, or restaurant or post office, no police, nothing !!!

I was part of the first wave of UN officials to go to Kigali to prepare for the arrival of others. Although, we were MINUAR2 officials, my colleagues and I had to sleep on the floor, 4 in the same office, that of the head of the ICT Section, for several days. We used mineral water for the toilet, supplied by the Canadian military contingent, eat military rations from the French contingent. Indian and Australian soldiers were handling medical services.

Because of my duties as head of the General Services Section and Chairman of an internal UNAMIR investigations board, I visited the country extensively, by car and by helicopter, I saw the magnitude of the damage a fratricidal war had caused even in the most remote places.

For two decades after I left Rwanda, I have been unable to do a conference or a participate in a debate on my experience in post genocide Rwanda without breaking down in tears even before primary school children or in front of University professors.

I returned in 2012 to Kigali to see if the sight of the changes in the country since my departure could help to alleviate my suffering when speaking of this country. I found that where there were only ruins, there were achievements and construction sites of roads and buildings, parks and hotels for every pocket. The city had changed so much that I had difficulty to find the road to go to the residence that I have occupied for two and a half years.

In modern times, Rwanda has never lived a period of peace and stability as long as since President Paul Kagame came to power. During this period, the development has been spectacular. If he had to leave power, which guarantee do we have to find another leader who does better than him to maintain national harmony? We may not like what President Kagame does in the field of human rights, but the regime has demonstrated its ability to keep the country united, despite the heavy past.

Therefore, I would have loved to hate him, but he remains my favorite dictator and I would like to see a great leader like him as the head of all African states.

In the following article, I wrote for the fr.globalvoicesonline.org network, translated into 6 languages, I give my feelings about what I have found and is documented about Rwanda. The original title was: Rwanda: Serious cracks on the roll of honor of Paul Kagame.

It was translated by  Catherine Randall, a New York-based freelance translator from French, Spanish, and Russian to English, with the title:

Rwanda: The Good, the Bad and the Hopeful

Rwanda remains deeply scarred by the 1994 genocide of 800,000 to 1 million people, including 80 percent of the Tutsi population as well as many Hutus. Around one-sixth of the country’s total population was killed in a matter of weeks.

Twenty years later the process of reconciliation still has a long way to go. President Paul Kagame is accused of suppressing his opponents, among other serious human rights violations. But efforts to rebuild are beginning to yield results.

One of Rwanda’s most remarkable achievements is the progress of gender equality in numerous areas. The percentage of women in the Rwandan parliament, at almost 64 percent, is the highest in the world, according to the Inter-Parliamentary Union’s 2014 ranking of 189 countries.

Louis Michel, a former minister in Belgium and European commissioner, noted on his personal blog [fr]:

These results are spectacular: In less than ten years, more than one million people have been lifted from extreme poverty and the country has seen a stable economic growth rate of 8 percent per year. Today more than 95 percent of children have access to a complete primary school education, infant mortality has been reduced by 61 percent, and three-quarters of the population have access to potable water. Finally, almost 50 percent of women have access to some means of contraception …. This makes Rwanda one of the very few African countries that will have almost entirely achieved its Millennium Development Goals in 2015.

The country’s first five-year plan for the development of new technologies [fr], created in 2001, showed significant progress. During the plan’s second phase, which ended in 2010, Rwanda saw a 8,900 percent increase in users, compared with 2,450 percent for the rest of the continent and a world average of 44 percent. The magazine African Renewal, hosted by the U.N., reports that four divisions of the public sector (ministers, agencies, provinces, and districts) and almost a third of the private sector have an online presence. Rwanda’s capital Kigali plays a primary role in the development of the surveillance system of navigation and aerial communications throughout the region.

President Kagame maintains that “the Internet is a needed public utility as much as water and electricity.” In collaboration with the Rwandan Telecentre Network (RTN), the government has implemented a plan for the development of Internet access in rural zones. A report [fr] published on balancingact-africa.com states:

Rwandan Telecentre Network (RTN) is rallying with the government’s efforts, pledging to create a national network of 1,000 ITC centers by the end of 2015 and to train local personnel.

A further sign of advancing access to new technologies is that Rwanda is the highest achiever among the African countries participating in the program One Laptop Per Child. According to the OLPC wiki page  :

After the genocide, the country took legal action, creating a National Unity and Reconciliation Commission (NURC). The NURC, established in 1999, aims to contribute to good government; promote unity, reconciliation and social cohesion between Rwandans; and form a country where everyone has the same rights.

Susan Thomson, a professor of contemporary African politics at Hampshire College in the U.S., wrote in an article [fr] published on academic publication hub Cairn.info:

Under [the ruling] Rwandan Patriotic Front’s rule, the post-genocide state has made a large contribution to restoring peace, unity and reconciliation throughout the country. The Rwandan state structure, solid and centralized, has facilitated a rapid reconstruction. Unlike most other African states, Rwanda is capable of exercising territorial control with great effectiveness. The state institutions have been restored.

The Rwanda Peace Academy (RPA) is an example of those advances. Created in 2009 with the financial backing of Japan and the United Nations Development Program, the RPA has a mission is to carry out research and to develop and implement professional training courses and internationally recognized educational programs. Its goal is to provide the army, police and civil servants with the necessary skills to respond to current challenges and future peace and security issues in Africa.

Unfortunately, this promising work is marred by the grave human rights violations reported by advocacy groups. Violations have been occurring for years. In 2012, after having sent several missions to the country, Amnesty International condemned the violations:

Between March 2010 and June 2012, Amnesty International documented 45 cases of unlawful detention and 18 allegations of torture or ill-treatment at Camp Kami, Mukamira military camp, and in safe houses in the capital, Kigali. The men were detained by J2 for periods ranging from 10 days to nine months without access to lawyers, doctors and family members.

Assassinations of opposition members [fr] have also been reported outside the country. Journalists and former political leaders close to the Rwandan president have been arrested or killed [fr]. The most recent arrests were confirmed at the beginning of April 2014.

The site arretsurimages.net [fr] reported the arrest of famous singer Kizito Mihigo, a genocide survivor, and three other individuals, including a journalist accused of plotting a grenade attack on a building in Kigali. Kizito Mihigo, however, is known for his activism for peace. He even founded an NGO for peace education. His blog [fr] reads:

Since 2003, he has been working for forgiveness, reconciliation and unity in the Rwandan diaspora in Europe. Upon his return to Rwanda in 2010, he founded the KMP Foundation (Kizito Mihigo for Peace), a Rwandan NGO that uses art (music, theater, poetry…) in education focused on peace, reconciliation and non-violence after the genocide.

The singer pleaded guilty, but serious doubts [fr] were raised about many aspects of the case.

Furthermore, for the past several years Kigali has had tense diplomatic relations [fr] with several other countries. Once a country favored by the West, Rwanda is now becoming a no-go area and is losing its military [fr] and development aid. Diplomatic relations with South Africa are strained following assassinations of opposition members in that country. There have already been expulsions of diplomats [fr] on both sides. 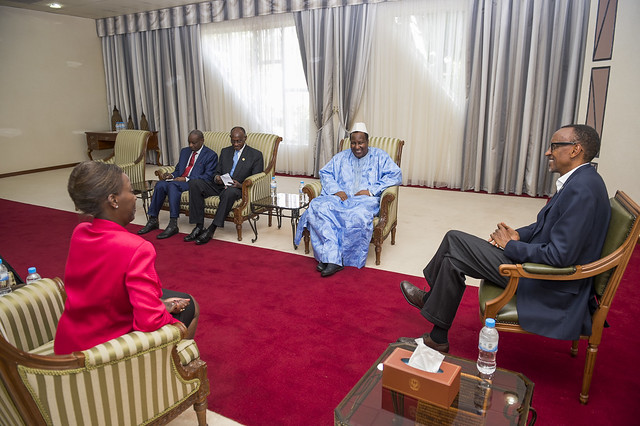